What follows is an account of events that occurred for the realization of our documentary. This summary is also the result of telephone conversations, numerous exchanges of emails, and video and audio recordings with the protagonists of an incredible adventure that I hope to arouse curiosity in scholars and fans of Stanley Kubrick.
This research project was born almost by accident and by a simple question: how come no one has ever tracked down the craftsmen who created the masks of the main movie Eyes Wide Shut? I was in Venice in August 2012, and I was determined to find a store that years before, I had discovered randomly. This shop had a sign in the window that contained this sentence: “Supplier of the masks of Stanley Kubrick’s film Eyes Wide Shut starring Tom Cruise and Nicole Kidman”. Searching the internet, I found the address of a shop located near the Rialto, and more precisely in Campo de la Guerra. It was “Il Canovaccio” . It was not the store that I saw many years ago, but in light of what has happened since, it was good that it was not so . 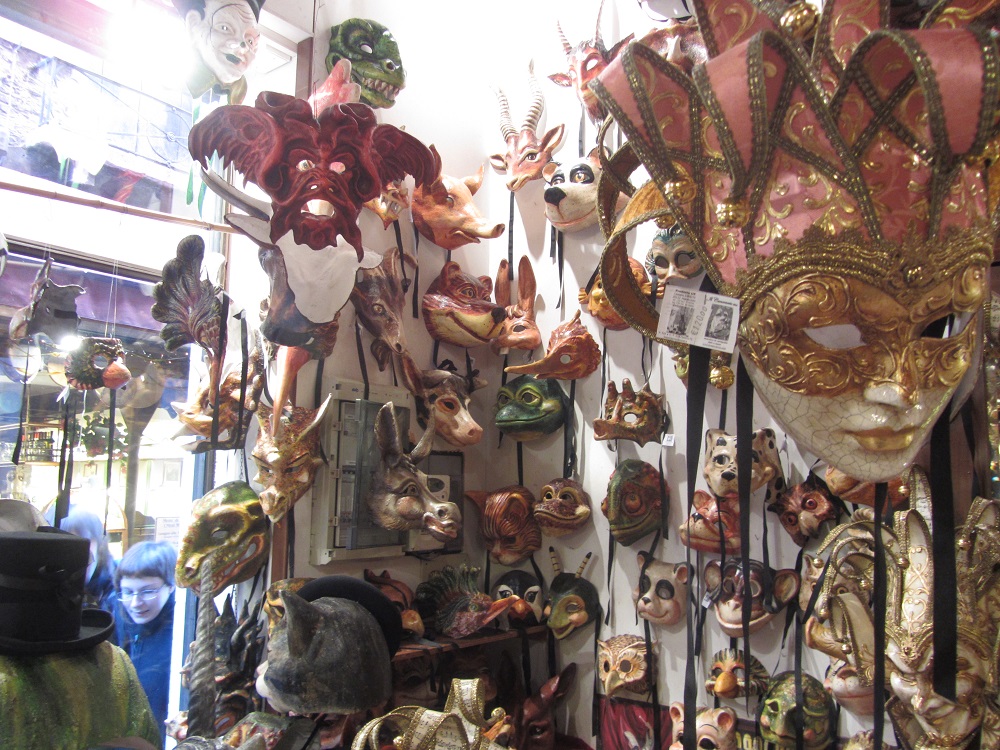 As it all started in 2012, you may ask why it has taken so long to publish this editorial only now in 2014 and wondering why it took so long to make a documentary dedicated to the masks in Eyes Wide Shut. The reasons are many, however, we can say that the delay is due to complex problems that have been revealed and solved with the passage of time. Many people have generated a wealth of information and a lot of memories unrelated to each other. Some details have emerged only after a long time and it was, in other words, difficult to reconstruct a unique puzzle consistent enough to allow the creation of a documentary. The main reason for this difficulty is due, no doubt, to the memory of the respondents put to the test by events that occurred 15 years ago . That is why it was important for me to get the documents, with dates and exact circumstances, that prove with no doubt that this beautiful shop (see photo below) had actually had connection with the production of the film. With the name of Kubrick, in fact, there is always the possibility that there is a tendency to exaggerate and overestimate every detail. For example, it is known that many shops in Venice have boasted, soon after the movie’s release, a collaboration with Kubrick himself for the construction of the masks in the film, for the sole purpose of advertising. “Il Canovaccio”, unlike other shops that actually had collaborated with Warner, seemed not very interested to raise awareness of this important collaboration. The first thing that gave me confidence, in fact, was to observe that these craftsmen had not shown any sign of blatant self-celebration. Only a very small and innocuous blurb of a local newspaper was taped on the front door of the store: nothing more. I immediately asked the store manager, Marco Bassi, if they had made their own masks for the main movie, which were displayed on one of the walls of the shop. He responded with a terse and full of pride, “yes!”. After a moment of hesitation, I asked if there was a willingness to participate in an interview about their work. I immediately asked the existence of some documents (invoices, fax or photos) attesting their collaboration with Kubrick’s Production. Marco told me that there was material to demonstrate this involvement and that more information could be sought from Franco and Francesca Cecamore, his friends and members of “Il Canovaccio”. And so it happened. Back in Milan I contacted, via email, Francesca who had known for many years a person who turned out to be crucial in the contact between Cecamore and Kubrick’s Production. Josie Sherabayani, a co-worker in the 80s, had decided to return to London and set up a masks shop. This business activity, which was located in the 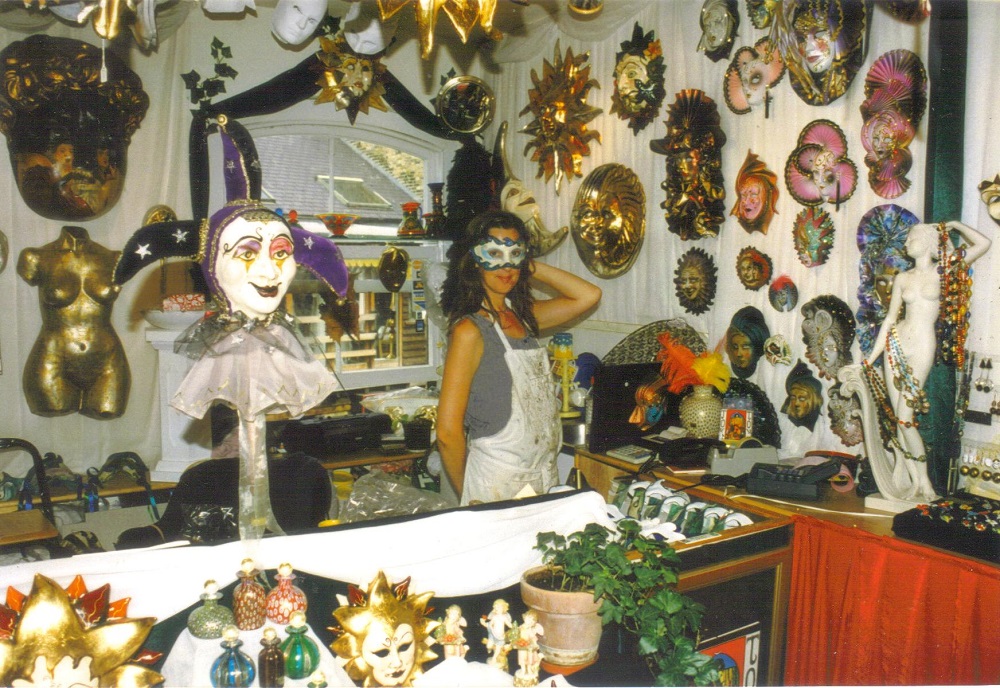 London Borough of Camden Town, was called “Joka Masks” and remained active from 1991 to 2000. According to the testimony of Josie, in this shop, in 1997, peeped coincidentally the Eyes Wide Shut costume designer Marit Allen, who bought the mask worn by Tom Cruise in the movie. Originally from Marco Bassi in Venice and then from Josie by mail sent to me on 10/23/2012, I listened to a little funny anecdote about the relationship that Tom Cruise had with his mask. In January 1998, Stanley Kubrick phoned the store of Ms Sherabayani in Camden. Here is her account of the phone call : “After a couple of months I got a call from Stanley Kubrick, which was quite a surprise. He asked me if there was anyway that I could make the nose space inside the mask bigger, as Tom Cruise was complaining about how uncomfortable the mask was. The Mask was from Kartaruga and was a normal male “volto”, beautifully decorated. I explained that there was no way I could make the nose space bigger as the mask was not very thick. I suggested that I could take a mould of Tom Cruise's face and recreate a similar mask. Stanley liked this idea though he did keep moaning about his fussy actors. It was an honor for me to speak to Mr Kubrick. A couple of weeks later he decided that his main actor did not need to have the mould made, which I have to say was a relief to me as I was quite nervous about covering Tom Cruise in plaster!” In Josie’s story there is a small but important detail. The brand that created the masks for the film, in fact, was, and is, Kartaruga, not “Il Canovaccio” although this shop had been the meeting place between the Cecamore and the production of the film, as we shall see later.
Before continuing the story of the elements on the masks of the film, there are some details that I would like to clarify. The filming of this documentary was conducted on two separate occasions. At first, in fact, I went alone to Venice on November the 7th 2012 to record the interview with Franco and Francesca Cecamore and Marco Bassi. However, I soon realized that the information and documents that I was able to recover should be managed with professional technical support. For this reason, I asked and obtained from Cecamore a second interview managed, on this occasion, with professional tools. On April 13th 2013, therefore, I went to the “Il Canovaccio” to re-record the interview with a small crew who transformed this project into a real documentary. The decision to make a second trip was motivated by a question that Franco Cecamore confided to me in the first interview in November. The model that was used for the mask worn by Tom Cruise was a 28 year old Viennese girl named Gabi, aka Gabriel Jallits (see photo at right). The most amazing coincidence resided in the fact that the story Dream Story (Traumnovelle , 1926), which 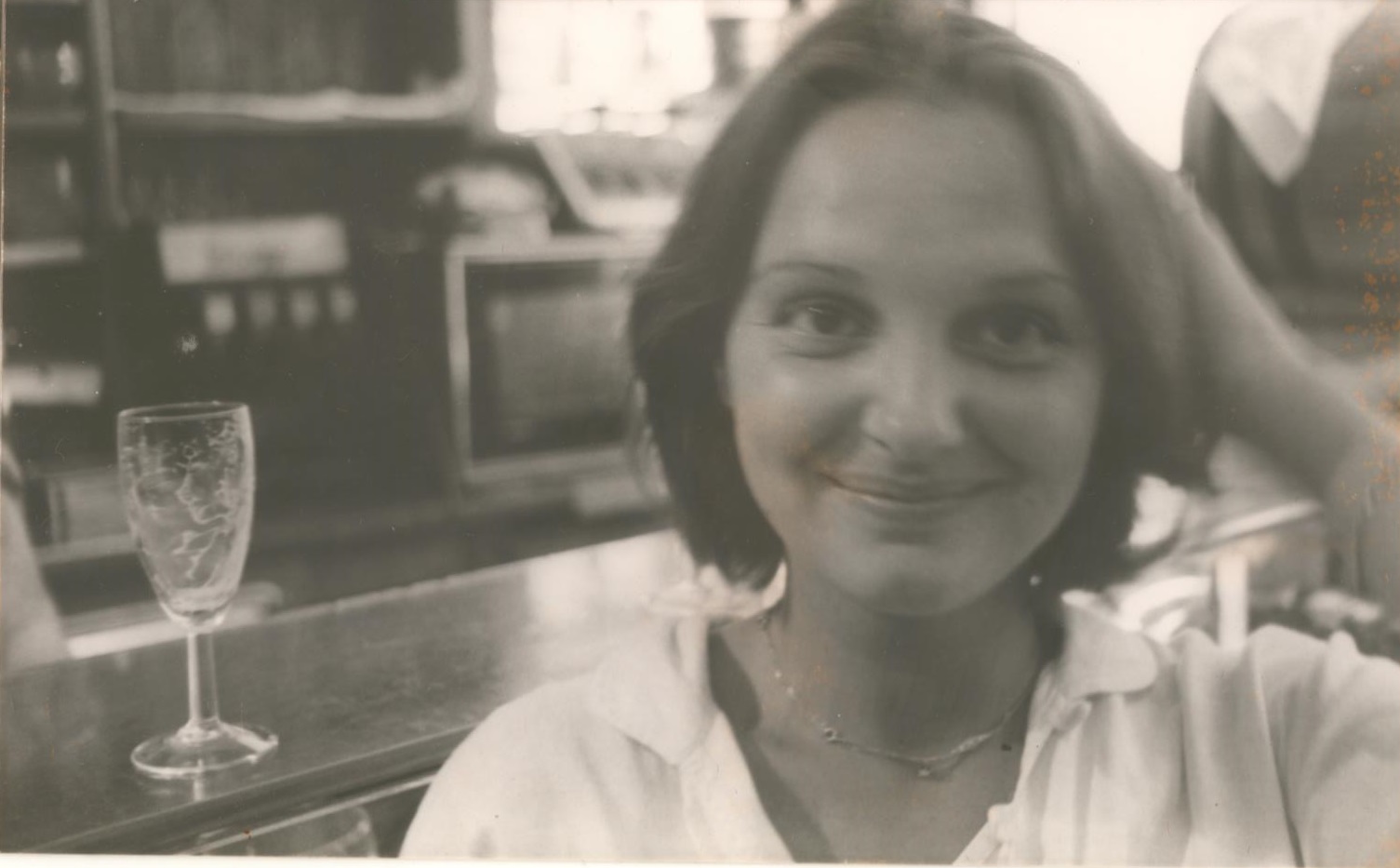 Kubrick had taken the script, took place in Vienna and its author, Arthur Schnitzler was born, himself, in Vienna. Precisely for this reason, I asked Franco Cecamore to recover the photographs of the model and all materials such as, for example, preliminary sketches from which he created the masks (see photo below: Mask of Tom Cruise). In the documentary a scene has been inserted in which Francesca Cecamore presents some basic documents to prove the involvement of “Il Canovaccio” in the Eyes Wide Shut Production. These documents have made it possible to reconstruct the exact dynamics of the visits that Jan Harlan, the producer of all Kubrick films since A Clockwork Orange (1972), made to the Cecamore’s workshop. During this visit, Harlan was accompanied by a person whose name Cecamore could not remember. It was thanks to Filippo Ulivieri “ArchivioKubrick.it” site manager and author of the book dedicated to Emilio D’Alessandro Kubrick's personal assistant (Emilio D’Alessandro con Filippo Ulivieri, Stanley Kubrick e me. Trent’anni accanto a lui. Rivelazioni e cronache inedite dell’assistente personale di un genio, Il Saggiatore, Milano, 2012), we were able to trace the identity of the woman who mistakenly was identified by Franco as Marit Allen: it was, in fact, Edda Del Greco who, along with her sister Barbara, with whom she had worked since 1996, to recover most of the costumes of the film, especially those concerning the Masonic-orgiastic masked ball. Jan Harlan, accompanied by Del Greco, made a visit to the workshop of “Il Canovaccio” to buy six masks on June the 26th 1997. Thereafter, on July the 4th 1997, five more masks were bought. But the most significant purchase was made on September the 18th 1997, or rather two days before the start of shooting of Eyes Wide Shut: Jan Harlan, in fact, bought fifteen masks including one worn by Tom Cruise, the one worn by the mysterious woman and the one worn by Leon Vitali. Francesca Cecamore told me that Vitali’s mask was especially requested in gold colour by Jan Harlan. The mask worn by the mysterious woman who saves Bill Harford from the clutches of the Masons is another work of Franco Cecamore who wanted to pay homage to the ritual masks of the Incas. All three main forms of the film were created in the years 1985-1986 and thus were not created just for the film. 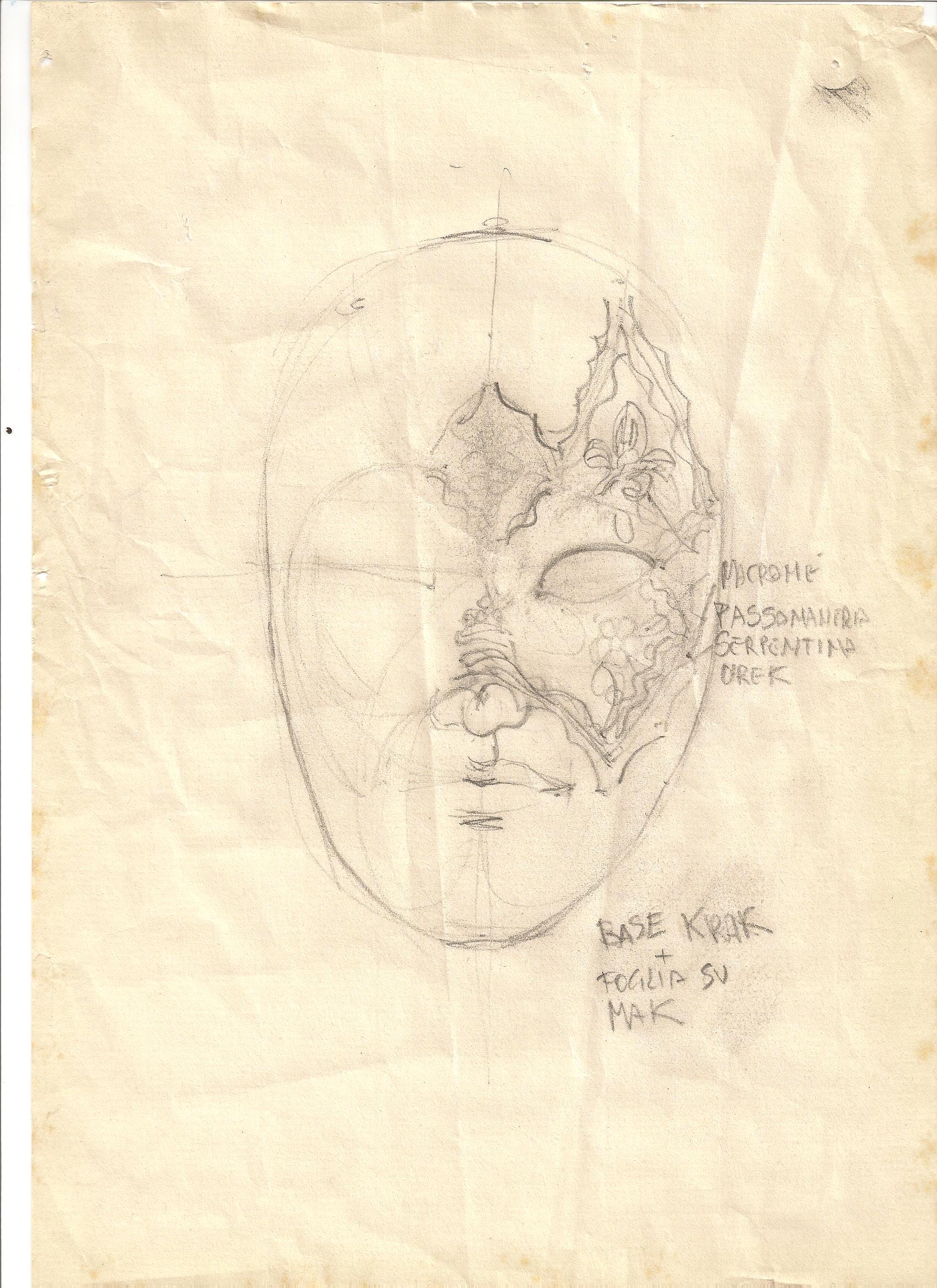 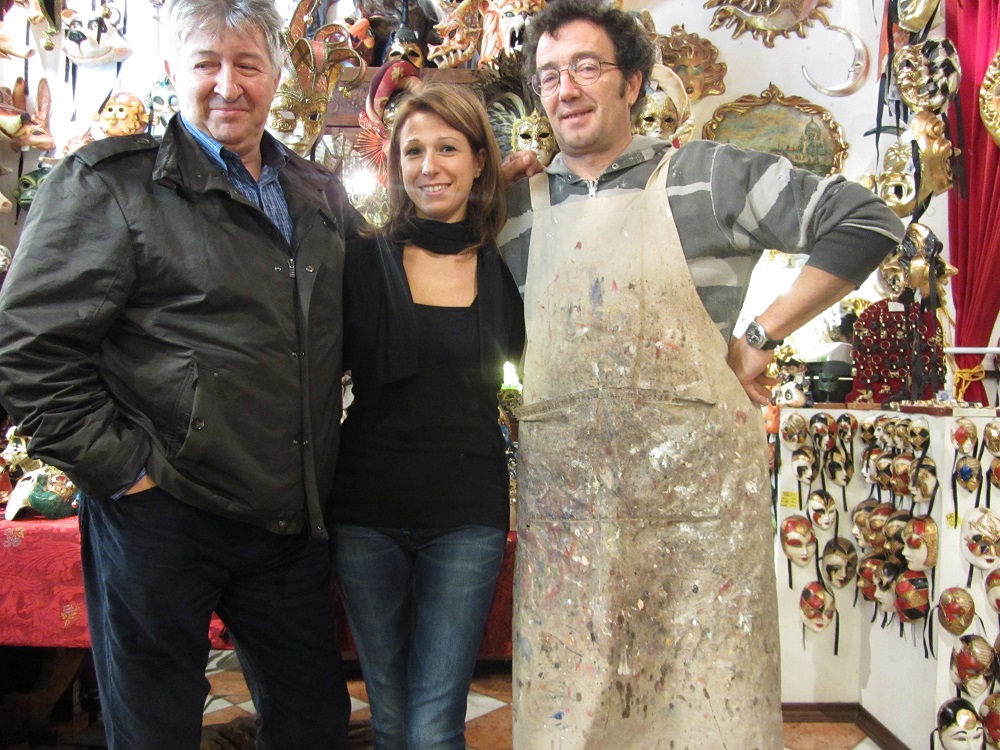